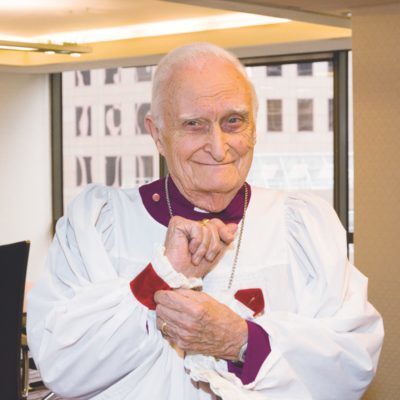 The disciples returned from their “test” journey. Other Gospel say they were very excited - amazed - it worked! Mark simply tells us they they were tired and Jesus suggests a quiet place for a rest. Even if the pace of following is demanding, there’s always a need to remember the quiet time - the rest time - the retreat time. Jesus has also received some sad news: John the Bap†izer, his cousin had been brutally killed by Herod. He needs some quiet too. So they go off, but it is not the quiet they and Jesus had anticipated. A crowd gathered.

THE MINISTRY of DISCIPLES

Jesus sees more than a crowd; they are more than statistics. They’re like shepherdless sheep - he feels their needs - that’s what compassion is. But the disciples wanted a rest - they wanted quiet, not a noisy demanding crowd. It’s evening; they’re even more tired; they’ve had enough. “SEND THEM HOME!” they demand. “YOU FEED THEM!” Jesus insists. There’s a great exchange dialogue between Jesus and the followers. They insist they’ve barely enough for themselves; he insists they bring what they have to him. The final scene: Everyone had enough. I wonder if the disciples got the message. Jesus did not expect them to solve the problem; he did expect them to do what they could. Sounds like many congregations I know. We have barely enough for ourselves. “Offer what you have!” This is a tough lesson to learn on this journey of following Jesus. The pace is breathtaking and we find it so hard to keep up. When sometimes we feel that people are too demanding, he says, You feed them! When we say we have barely enough for ourselves, he says, offer what you have. But it’s interesting that when we do follow like that miracles happen….there’s always enough.

In his training of the disciples Jesus points to a contrasting kind of discipleship. The Pharisees were the religious leaders of the day and they would have said they were disciples or followers Moses and the Law of Moses. They obsessed over it! To the point where the outward observance Page of 2 4 of the law mattered more than what the law was really all about. Jesus warns his disciples about being more aware of outward appearances - the show - if you like - when what is going on in the heart and in the life are what matter. So beware of the Pharisees; “they honour God with their lips, but their hearts are far from God”. There’s a warning there for people like you and me - we love our traditions - our way of doing things. It’s always a danger that they’ll become an end in themselves - our prior concern. Then our lives become ingrown and introspective and narrow. That’s not what Jesus is about and it’s not what followers are all about. The opposition is there constantly. I wonder why we followers think we should have an easy ride - but the Pharisees are there again. They want some proof about Jesus identity - they want a sign from heaven. As you read ancient history, you hear how the ancients constantly looked for signs that the gods favoured them - a raven flying overhead; a peculiar shaped cloud, or even the birth of a baby - maybe the gods are speaking. Well the Pharisees are asking for some evidence that God is with this itinerant preacher from Nazareth. Jesus says that’s not the way God works. God calls for trust and faith - no proof - no sign. Followers are to live by faith without expecting that God’s person will be proven, just to keep us going.

Along the way someone seems to want to join the group. He catches up, and asks, “What do I have to do to gain eternal life? Jesus tells him that there are two rules to follow: LOVE GOD WITH EVERY FIBRE OF YOUR BEING. LOVE OTHERS AS MUCH AS YOU LOVE YOUR OWN SELF. The young man insists that he does both. But there’s one thing missing. Jesus says, just one more thing. Your possessions still possess you. What you have is holding you back. Break the hold of whatever has a hold over you, and then follow me. This is a tough one! The disciples reacted: Who then can be saved? they ask. It’s a question I’ve heard asked many times: “Is nothing my own? We’re back to what Jesus said earlier: “Bring what you have to me”. If I take Scripture seriously, I have to struggle with words like this: I have called you by name; you belong to me” If I take the Creation narrative seriously - and I don’t mean literally - it is very obvious that God is the Creator of all - it all belongs to God, and humankind are agents untrusted with the Creation by the Creator. In a very real sense, all I have and all I am belongs to God. So the young man Page of 3 4 in our text is being told, whatever you see as your possession - let go - in the last analysis it’s not yours at all. In our text the young man went away sadly. I suppose he was not ready let go. Common questions that I’ve been asked about this are: Does this mean I can never spend anything on myself? What about buying food for my family. Are holidays allowed? …….. and so on. I believe Jesus was not talking about never enjoying the things of life. He was certainly not talking about neglecting families. Jesus’ calls followers to recognize they need to take God into account in very aspect of life - including possessions - including the way we spend time; including the way we use our energies; including how we use leisure and recreation. There’s no question the journey is at a fast pace.

Jesus and his followers lived in occupied territory. Their land was overrun by the Roman Empire, and Judea was one of the less significant provinces, presided over by a Roman governor. Every time they want to the temple they paid a temple tax, and annually they were assessed a tax that went directly to Rome, collected by those wretched tax collectors. So it’s not surprising the subject came up with Jesus while he was training his followers. The Pharisees ask him about the taxes - should we pay them or not? Are we bound by the laws of the land or not? Jesus’ answer is not really about taxes. His concern is that in the process of being good citizens there is no forgetting of Gods priority in our lives. “Give to God what belongs to God”.

The training is nearly over, but it’s no time to relax.These followers gather for a final meal. One goes off to turn Jesus in to the authorities for money. Peter boasts that even all the others run off, he will not.They go to the Garden where Jesus pray, and later is arrested. At that point the followers stop following. Their own lives are on the line, and that is a possession they cling to as their own. They run. Interestingly Mark notes that Peter follows “at a distance”. But followers can’t do that. “If you’re not with me, you’re against me” said Jesus.

We’re preparing for Christmas as we move through Advent. It’s as good time to examine the journey we’re on, and we get ready to welcome Jesus Page of 4 4 Christ into the world to set the pace for all of the journey we’ll make; who both sets the pace and enables us to maintain the pace, breathless as the journey will prove to be. +