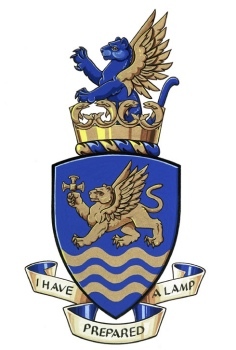 The Anglican Parish of St Mark was granted its arms Octobber 15, 2004 while Dean Kellerhouse was rector.  This is from the site of the Canadian Heraldic Authority.

Blue represents the parish church’s proximity to the sea. The winged cougar is a British Columbia version of the traditional symbol for St. Mark, the winged lion. The Canterbury cross is a form of the cross especially associated with the Anglican Communion and one regularly used at St. Mark’s. The wavy gold bars at the base represent the sun on the water moving on the shoreline. The three bars also refer to the Holy Trinity, as well as to the arms of the Province of British Columbia, the location of the parish.

The circlet of fish has a triple meaning: it refers to the name “Qualicum”, derived from the Pentlatch word “Squal-li” meaning “chum salmon”, as well as to the fish, an ancient Christian symbol. The four salmon also refer to the four Gospels, one of which is that of St. Mark. The winged cougar repeats the symbolism of the arms.

I HAVE PREPARED A LAMP (Ps. 132: 17) indicates a core part of the parish’s mission to be a beacon of Christian witness in the community. It also ties into the gold of the design and the power and majesty of God.